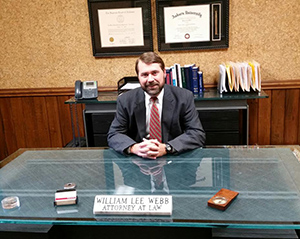 Lee Webb was born in Birmingham Alabama in 1980. He was raised in Birmingham and graduated from Briarwood Christian High School. While growing up in Birmingham, Lee was involved in the Boy Scouts where he earned the highest rank of Eagle Scout along with his God and Country. He graduated from Auburn University in 2004 with a degree in Finance and then from Jones School of Law in 2009. While in law school, Lee was the president of the Christian Legal Society, a member of Phi Alpha Delta, and was awarded best paper in Alternative Dispute Resolution.

Lee is a member of Fairhope Rotary and is Council Attorney for the Boy Scouts of America Mobile Area Council. When not practicing law, Lee enjoys spending his free time with his wife, Megan, and his son, Sawyer. He also enjoys hunting, fishing and pretty much anything having to do with the outdoors.

Lee has served as assistant prosecutor for many cities and towns in Baldwin County since 2013.

Call to Speak with a Lawyer